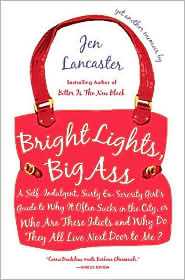 in Bright Lights, Big Ass: A Self-Indulgent, Surly, Ex-Sorority Girl’s Guide to Why it Often Sucks in the City, or Who are These Idiots and Why Do They All Live Next Door to Me?

Bright Lights, Big Ass: A Self-Indulgent, Surly Ex-Sorority Girl’s Guide to Why It Often Sucks in the City, or Who Are These Idiots and Why Do They All Live Next Door to Me?
Jen Lancaster
2007
New American Library

Mass transit, neighbors, squirrels.
What do these things have in common?
They’re all suckier in the city.
But Jen Lancaster is not.      Jen Lancaster is not afraid to show the world who she once was, and certainly doesn‘t hide who she is now (which is much to the reader‘s benefit).  Her style of self-deprecation-through-self-aggrandization works:  Her trials are snort-laugh funny and her victories satisfying.  Bright Lights, Big Ass is a perfect book to pick up when you want to unwind, or chuckle so much that people feel too uncertain about your mental stability to sit next to you in the doctor’s waiting room*.

The city, Chicago to be precise, is where Jen Lancaster shines.  She battles the repulsive Monkey Woman on the bus and wins (and eventually arrives at the library)!  She shows the neighbors that she’s above their pettiness (and kind of calls Homeland Security on one of them, but that‘s totally a different story)!  She defeats the dastardly Winky,  the wonky-eyed squirrel (which makes sorta causing that brownout totally worth it)!  And she looks good doing it (she got it at Target)!

Bright Lights, Big Ass is a memoir of Jen Lancaster’s experiences as a writer in the city; or more precisely, a former VP who turns to temping while pursuing a career in writing (in the city).  She learns that her high-end salary didn’t buy happiness (“…I realize I never had a professional job I didn‘t loathe on some level.”).  It did, however, buy lots of other stuff (usually green and/or pink and always very cute and/or yummy), and so she must adjust to a new lifestyle.  Which she does, gracefully, with the help of her keen wit (and
Trader Joe‘s).

Bright Lights, Big Ass doesn’t dwell on Lancaster’s transition; like sparkly, pretty jewelry, it has many facets.  Familiar topics like marriage (and games that involve punching your spouse); health matters  (and how not to behave at the gynecologist’s office); domestic affairs (and the horror-in-a-tight-shirt that is Rachael Ray); and family  (and the gentle art of explaining a reacharound to your mother) are all covered in their awkward glory.